Rosacea (pronounced roh-ZAY-sha) is a common skin disorder affecting an estimated 16 million Americans, according to the National Rosacea Society (NRS). The NRS claims that because of the seemingly-innocuous nature of the disorder, many Americans are unfamiliar with rosacea and may not even know that they have it.

Rosacea is a chronic inflammatory skin condition that can manifest with any of the following symptoms:

It is a progressive disorder, meaning that it typically gets worse over time. Rosacea is cyclical and will flare and subside over time. It may be mistaken for other skin disorders such as acne, food allergy, or eczema.

What is it caused by?

The underlying cause of rosacea is unknown, but it is generally aggravated by environmental factors that cause flushing of the face such as alcohol, hot weather, wind exposure, hot water, stress, or spicy foods.

Who is at risk for rosacea?

The people most at-risk for rosacea are fair-skinned adults, usually between the ages of 30 to 60. The average rosacea patient will have a history of easily blushing or flushing.

No. There is no evidence that rosacea can be transmitted from person-to-person.

There is no research confirming a genetic cause of rosacea, but it does affect members of the same family.

Fortunately, rosacea is not dangerous. However, many patients suffer psychologically and socially due to their outbreaks. The National Rosacea Society provides some sobering statistics:

Our dermatologists can help you get your rosacea under control. If you have skin problems like this or psoriasis, call Arlington Dermatology at 847-392-5440 to set up an appointment with one of our trusted doctors. 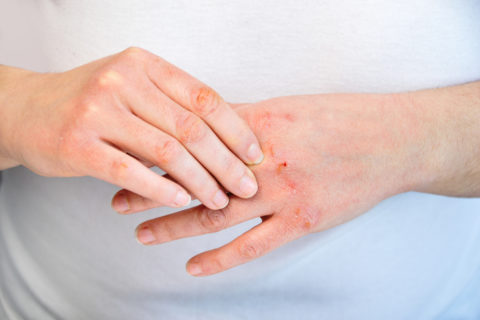 Dermatitis is a group of dermatology conditions that cause skin inflammation. There are many different types of dermatitis, which may be caused by…